Get fresh user-centric automation content from us directly into your inbox.

Anita Nunes, VP of Sales and Business Development at SKAEL, On Leading with Authenticity and Radical Candor

Of course, that’s easier said with the benefit of hindsight. Especially once you – as an American female of mixed ethnicities and races – can step back and survey how far you’ve come.

Now Vice President of Sales and Business Development at SKAEL, Anita was raised in Pittsburgh, Pennsylvania by a mother of Portuguese and Irish descent and a black father of Samoan heritage. Her father’s serial entrepreneurship led the family to move a lot and sometimes struggle financially. Though these upheavals meant Anita changed schools frequently, her parents always emphasized the importance of education.

After graduating from Taylor Allderdice High School – known for notable alums including Wiz Khalifa, Beedie and Mac Miller – she attended Penn State for a year before transferring to and graduating from Duquesne University. She walked away with a degree in finance and economics, and a husband. Shortly after graduation, they welcomed their son – on her 21st birthday. “We threw a three-day party on his 21st birthday that I called ‘Come Crash His Party the Way He Did Mine.”
‍

Anita’s first job out of college pricing money markets at Federated Investors was eye opening, not for the work experience but because of the culture. It was 1995 and women were not allowed to wear pants in this office. Not one to back down, Anita joined forces with other women and they wore the shortest skirts possible without being obscene. “That was my first fight against the machine, pushing back against the Caucasian male-dominated world.”

Anita next served as CFO at a non-profit responsible for $160 million in government funds, where she had another revelation.

“I didn't understand giving money to people just because they couldn't find jobs. I had ground my way to where I was and thought, ‘You don't need handouts. You need to figure it out.’ It was insightful to hear people's stories and challenge my preconceived notions.”
‍

Hustling to Break Into the Tech World

Anita’s other realization was that she didn’t want to stay in finance and accounting, and wanted to live in DC. A good friend working at Cisco told her of an upcoming job fair in DC. She went and landed an interview for a sales position with Cisco.

“For years, everyone – my parents, husband, coworkers – said I should be in sales but I always said, ‘No. No. No.’ ” While interviewing, she knew sales was her future.

After Anita doubled down to make a convincing case about why Cisco should hire her -- a finance person with no sales experience -- she got the job. “They said I stood out by showing hustle during the interview process. That’s when I fell in love with sales because in the moment, I had been able to successfully maneuver and succeed.”

Anita and her family moved to San Jose. “Some of the smartest people I’ve worked with were at Cisco. I don’t think you can be trained at a better place.”

With no sales experience, Anita was trained on the ins and outs of sales. She steadily worked her way up from associate sales rep to Enterprise Account Manager and finally Senior Healthcare Enterprise Account Manager in a brutal environment. “They posted the top 100 salespeople’s names and photos in every building across the San Jose campus.” Anita made the list and earned a promotion every one of her eight years at Cisco.
‍

Giving Credit Where It’s Due

She partly attributes her success to her father’s influence and her own innate savvy. As she describes, her Dad was a good salesperson and could get anyone to do anything. Plus, Anita was always able to intuit what people were thinking about and trying to do, and had always been good at connecting the dots. She was also a creative problem-solver.

“I had to make something out of nothing all the time as a kid. That and my Dad’s influence were perfect for sales because once you grind it out to close a deal in sales, you need to be ready to go again and keep pushing.”

Anita also calls out Paula Hansen, now CRO of SAP Customer Experience, as an important mentor who helped Anita shape and harness her raw talent. In addition to coaching Anita on the nuances of effective and diplomatic communications, she helped her navigate the male-dominated workplace. “She was a successful female who helped me make my way in the all-boys club.”

Anita frequently crossed paths with Baba Nadimpalli, founder and CEO of SKAEL, starting with her time at Cisco. He was connected with Carrie Francey of Women in Cloud who was looking for conference panelists. Baba made Anita aware of the opportunity and, impressed with the organization’s mission to support female technology entrepreneurs, Anita accepted the invitation to get involved.

“Top-down changes within companies are great, but the grassroots ideas move things forward in a big way. Women in Cloud trains women to succeed in the technology arena, and inspires them to actively lift each other up. It invests in female entrepreneurs who often get overlooked by male-run investment firms.”
‍

Passionate about this mission and workplace diversity, Anita has been involved with many visionary organizations over the years. She is a board member of the San Jose chapter of the American Leadership Forum (ALF), which trains leaders to have tough conversations about diversity in the workplace. “I'm able to articulate my point of view, even when working with people holding opposing views. It takes radical candor to face and address issues of diversity head-on.”

She’s a member of ALF’s Black Caucus – an offshoot for black Americans – and is a founding member of Chief in San Francisco, an organization focused on putting women in high positions, such as on boards and in senior leadership roles. Anita is also involved with Elevate, a woman’s networking organization, and she advises and invests in female founders – whether cis, trans, agender, gender non-conforming, non-binary, or two-spirit – as a member of Pipeline Angels.

For Anita, these organizations are a way for women to come together and share their strengths.

“Women sometimes operate in isolation. We try to put on the right face while making sure everything is okay at work and with our families. There's a lot of isolation, especially as you move up the ranks. These organizations help you see you’re not on an island, and you can network in a really authentic way, connecting with women who can relate to your experience and offer new perspectives.”

Facing Our Biases Head On

Speaking to the power of organizations that bring together women who wouldn’t necessarily meet otherwise, Anita reflects on how far she’s come since her early career days. At Cisco, Anita was the only woman of color in sales on the West Coast. “People thought I was an engineer – it was the only way they could make sense of me in that environment. That’s nothing against Cisco. Many people in many companies thought that way.”

When Anita learned Cisco was actively seeking to hire another female of color, she complained to her boss. “I said I stood out, had built my brand around my unique identity and didn’t want another woman of color coming in and diluting my brand. As I look back, I think, ‘What was I thinking?!’ ”

Now when Anita speaks up, it’s to advocate for inclusion. “I’ve been in the boys club a long time and am comfortable being direct. I am confident. So I use that to help others who aren’t comfortable speaking up, both women and men.”
‍

As Anita says, everyone has a bias so it’s not about eliminating bias, it’s about acknowledging it and being thoughtful about making decisions with that awareness. “It’s normal to make assumptions about others so you have to just talk to people really honestly. But organizations need to also make investments in the right places to address the core issues so people trust that change is happening.”

This brings Anita back to the importance of grassroots’ efforts. “It's fantastic when a company has a Diversity and Inclusion charter, but change has to happen at the lower levels too.”

She underscores the need for organizations to be deliberate in their hiring practices, and to then empower women and women of color once they’re hired. “When I entered the technology field, I had never been to Napa. I hadn’t traveled the world. I had come from being dead broke on food stamps, and it’s overwhelming trying to navigate this unfamiliar world.”

To that end, she recommends that those in comfortable positions of power –  particularly straight Caucasian men – actively say and show women that they are allies. However, she cautions against treating women as victims.

“We're not victims. We just need you to get us on the freeway because, for whatever reason, that on-ramp never shows up for us. So if we can be passengers in your car, and you can get us on the freeway, we’ll be fine. Thanks so much and we’ll pay for the next tank of gas.”

Building on her involvement in these organizations, Anita looks forward to what she can help SKAEL accomplish. “I joined because I was impressed with Baba’s vision to use AI- and ML-driven automation to solve the challenge companies face keeping customers happy without overburdening employees.”

“I’ve known Anita for a long time as a passionate, creative, successful sales leader so naturally when I was building out the team at SKAEL, I immediately reached out to her,” says Baba “She's been instrumental in bringing in our first set of customers and building the foundation for future success. And, as a key member of SKAEL’s leadership team, she’s helping shape our organization for the better.”

As she works to help SKAEL grow revenue, Anita highlights the advantages of startups when it comes to addressing diversity. “It’s easier for smaller companies to do things the right way from the start.”

To Anita, it comes down to taking thoughtful action. “Don’t fall into the trap of talking to the same-old VC and law firms. Engage the types of businesses and partners that reflect the workforce you’re trying to build.”

Anita Nunes, VP of Sales and Business Development at SKAEL, On Leading with Authenticity and Radical Candor

Join Our Newsletter and Get the Latest
Posts to Your Inbox 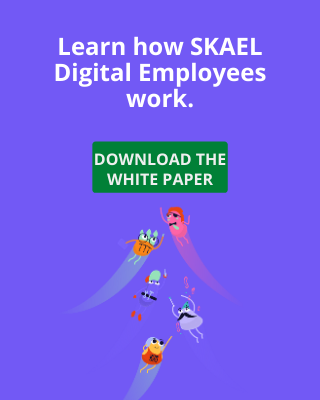